The December/January issue of American Craft included my article about the craft scene in Portland (near and dear to my heart naturellement). It was a difficult task narrowing down the locations and organizations to feature, and trying to find a balance between the no-brainers (MoCC) and the lesser known or newish (Woonwinkel). But a fun task, too.

We also had the holiday show and sale out at Clay Circle, and seeing as it’s a little late to advertise I’ll just say it was SMASHING and YOU SHOULD COME NEXT YEAR.  What voracious appetites our visitors had. Such a great group of sculptors to show with.

After the show was over it was, you know, the holidays. So I took a break from clay and did a little painting and went to the coast and got the flu like everyone else in Oregon. Here I am, looking happy walking on the beach in Otter Rock with my little one, just before said flu hit. 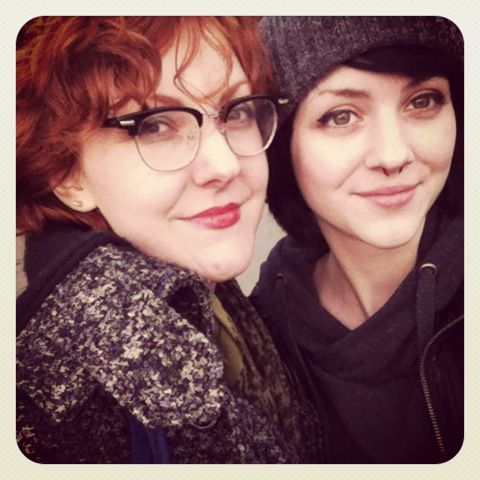 This Saturday will be the first time in about six weeks since I’ve been to the studio. It was good to take a break from clay, but now I’m ready to start some new work. I have been on a triptych kick which I would like to think has more to do with my longstanding affection for the number three than the influence of Francis Bacon’s Three Studies of Lucien Freud. Joaquin and I went to see it a couple of weeks ago and it happened to be the same day as the closing of the fancy Samurai exhibit that honestly I was totally uninterested in (I’m sorry Katsushiro, Kambei, and Kikuchiyo…). There was a long line outside the museum that you could skip if you bought a membership. Brilliant marketing. So we got to see the Bacon and now we finally have memberships and it was all beautiful except they’ve taken down the little Agnes Martin I’m so fond of in the Jubitz Center.

Still, I don’t care what all the fuss is about, I was thrilled to see Three Studies. Talk about repetition being a form of change.  The sureness of line and the way things get messy but stay tight — it’s so good! Just luscious.